I have been looking up more ways to use chia seeds in recipes. Chia seeds can absorb a lot of water, and can thicken up the liquid that it has been soaking in. I found a bunch of recipes for chia puddings, and have been experimenting with my own pudding recipe. I love pumpkin pie. Actually, I love anything that contains pumpkin. So naturally, I decided to make a pumpkin chia pudding.

I have never soaked chia seeds before, so I soaked 1 tablespoon of seeds in 1/2 cup of soy milk to see what would happen: 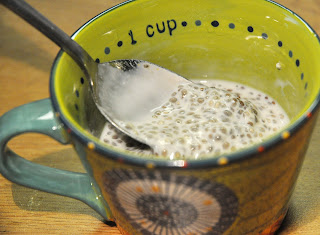 These seeds have been soaking for a few hours, but it really only needs about 20 minutes. The mixture does get thicker the longer it stands, though. The texture is interesting. It is rather slimy, and the seeds are a bit softer than unsoaked seeds, with a nutty flavor.

I then stirred in about 1/2 cup of canned pumpkin puree and pumpkin pie spices (only had cinnamon and ginger on hand). 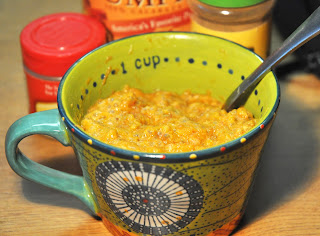 The soy milk soaked chia and pumpkin puree do not mix together very easily. Also, adding some sweetener and vanilla extract would improve the taste.

I thought it would be easier to just mix all the ingredients together at the beginning, and letting it thicken. This time, I used a little less pumpkin, and the resulting mixture was quite thin. 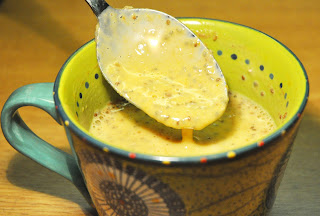 After letting it soak for about 20 minutes, it thickened to a more pudding-like texture. 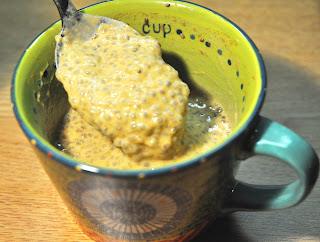 I made the second batch right after I finished eating the first batch for dessert, so I put it in the fridge to eat the next day. After letting the pudding sit in the fridge for almost a day, the pudding became thick enough to turn the cup upside down without any of it falling out! That's the power of chia ;) Oh, and it's really tasty, just like pumpkin pie :P


Mix everything together in a bowl and let it thicken for at least 20 minutes in the fridge. The longer it sits, the thicker it will become.
Posted by The Challenged Health Nut at 5:14 PM

Who is the Challenged Health Nut?

The Challenged Health Nut
I am obsessed with food and cooking! However, in the past, I have had an unhealthy relationship with food and eating, and I am aiming to change that. I am kicking my unhealthy eating habits and re-discovering my relationship with food. The Challenged Health Nut is about self-discovery, insight, and healthy recipes focused on nutritious, wholesome foods.